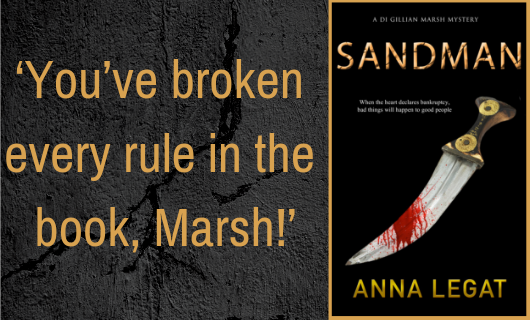 DI Gillian Marsh is a handful. She can be abrasive and insubordinate. She is a thorn in her boss’s side because she simply doesn’t know her place. She is every murderer’s worst nightmare because if you’ve got something on your conscience you won’t shake her off your scent. Her team know not to get in her way as she steams through her cases like a runaway train that will wait for no one. No, Gillian isn’t likeable, but that doesn’t worry her. She wasn’t born to be liked – she was born to get to the bottom of the matter. That takes dogged determination, hard-nosed attitude and never letting go. It is no wonder that with all those characteristics, DI Marsh is affectionately known as Pitt Bull.

I am quite particular about not labelling DI Marsh as a lady-detective. Not because she isn’t a lady, but because she wouldn’t appreciate the label – the gender label. When she’s on a case, she isn’t a woman. Neither is she a man. She has no gender.

She is just a damn good detective.

I have been brought up to take gender equality for granted. I have never submitted to gender stereotypes and have led my life as a human being, full stop. If I had to describe myself, I would never start (or finish) with I am a woman. Womanhood would constrict me to one side of humanity. I wouldn’t want to miss on what the other side had to offer. I wouldn’t want to take sides. So no, I am not a feminist. I don’t see a point in gender wars.  I have now passed my beliefs to my protagonist. I won’t have her defined by reference to men or be seen through a man’s eyes. Gillian doesn’t aspire to be man’s equal, or even to be better than any man. Her straightforward and uncomplicated objective is to be the best in absolute terms, without bringing sexuality into it.

That’s what makes her a damn good detective.

Gillian is tenacious and methodical. She analyses cases to death. She calls that inventorising. In her head, she runs an inventory of facts and evidence, mulls them over, tries different angles and matches all the pieces until they all fit together. She doesn’t give up. That constant and entirely absorbing process leaves her little time for domesticity.

Her daughter, Tara, is her Achille’s heel. Gillian is an impromptu mother. She blunders through motherhood, plagued by insecurities and anxieties. God knows how she gets through mothering without major incidents! Probably beginner’s luck. And there is another character flaw on the domestic front. It is to do with men. Gillian doesn’t know quite what to do with them after sex. Men seem to slip through her fingers like sand. She can only give them so much of her time, and that is never quite enough. But that’s the choice she knows she has to make. She has to choose her job. After all, she may not be the greatest lover the world has seen, but –

…she is damn good detective.